Fabrizio Meloni, since 1984, is the first solo clarinet chair of the Orchestra and the Philharmonic of the Teatro alla Scala in Milan. He has finished his clarinet studies at Milans Conservatorio G. Verdi with summa cum laude and the special mention for his artistic achievement. Winner dozens of national and international prizes (ARD Munchen-1987- Prague 1987-, among all), he has been partner of soloists of international reputation: Bruno Canino, Alexander Lonquich, Michele Campanella, Heinrich Schiff, Friederich Gulda, Nazzareno Carusi, Editha Gruberova, the Hagen Quartet, Myung-Whun Chung, Philip Moll and the Fine Arts Quartet. He has toured the United States and Israel with the Quintetto a Fiati Italiano, performing works specially dedicated to this ensemble by Luciano Berio (with whom he has collaborated along the years 1989-1994) and Salvatore Sciarrino - receiving enthousiastic consents of public and critic. The same success he has had in various series of concerts in Japan with Phillip Moll and I Solisti della Scala (Tokyo and Osaka), performing a program of Italian Operas collections recorded in the CD I Fiati allOpera (DAD Records). In 2007 he has toured Italy, Germany, the United States, Australia and Japan playing duo with the pianist Nazzareno Carusi, celebrating the anniversaries of Johannes Brahms and Domenico Scarlatti. After their performance for the Hamburgs Brahms-Gesellschaft, Cord Garben (the artistic producer of Arturo Benedetti Michelangelis Deutsche Grammophone recordings) has written:  The listening to their recital has been an unforgettable adventure . He has realised various recordings: the Sinfonia Concertante and the Concert K 622 with the Philharmonic Orchestra of Teatro alla Scala conducted by Riccardo Muti; Pulcherrima Ignota with the Bairav Ensemble: tribute to the tzigane music in the world; Duo Obliquo with Carlo Boccadoro; the Quintets by Mozart and Brahms; the Histoire du Soldat by Stravinskij in the double version for trio and settimino with Domenico Nordio, Giorgia Tomassi and I Solisti della Scala; the Quatuor pour la Fin des Temps by Messiaen with the Trio Johannes. For the most prestigious Italian musical magazine, AMADEUS, he has published the Concertos for clarinetto and orchestra by Rossini, Donizetti and Mercadante with the Accademia Filarmonica of Verona; and the two Sonatas op. 120 by Brahms with Nazzareno Carusi: this recording has been defined  skillful by the same review. In 2009 was released several recordings: the DVD  Duets (Warner), the Francaix/Nielsen/Coplands Clarinet Concertos (Amadeus), and  Ol ari Nyiro Diary  (by Fabrizio Meloni & Roberto Prosseda, from novels by Kuki Gallman. He has given masterclass for the Paris Conservatory of Music, the Advanced Conservatory of Italian Switzerland in Lugano, the Tokyo University, the New Yorks Manhattan School, the Chicagos NorthEastern Illinois University, the Academy Ca Zenobio in Treviso and for the summer courses of Monterubbiano (AP). He also teaches for the Teatro alla Scalas Academy, the Conservatorio di Udine (Italy) and the Conservatorio de Musica in Zaragoza (Spain). He is author of the book  The Clarinet , published by Zecchini Editore, and prefaced by Riccardo Muti. The tv channel Sky- Classica has devoted a documentary to his artistic life. In May 2012, he conducted the Mass in C Min KV417 with the Orch. Sinfonica Abruzzese and the singers of the Academia del Teatro alla Scala. In November 2012, the Catalan radio program Impression dedicated to Fabrizio an entire week of programming. In Summer 2015, the Meloni- Yoshikawa duo went on tour in Japan and performed at the prestigious Suntory Hall  Tokyo, an event that has produced a documentary published by NHK (Japanese National Television Channel) in the Classic Club series and subsequently broadcasted by NHK-FM radio Best of Classic program. In 2015, DEUTSCHE GRAMMOPHON released the cd VIEF ET RYTHMIQUE entirely devoted to the French repertoire for Clarinet and Piano (with T. Yoshikawa). In 2016, DEUTSCHE GRAMMOPHON released a new CD entirely dedicated to Mozart performed with the basset clarinet. 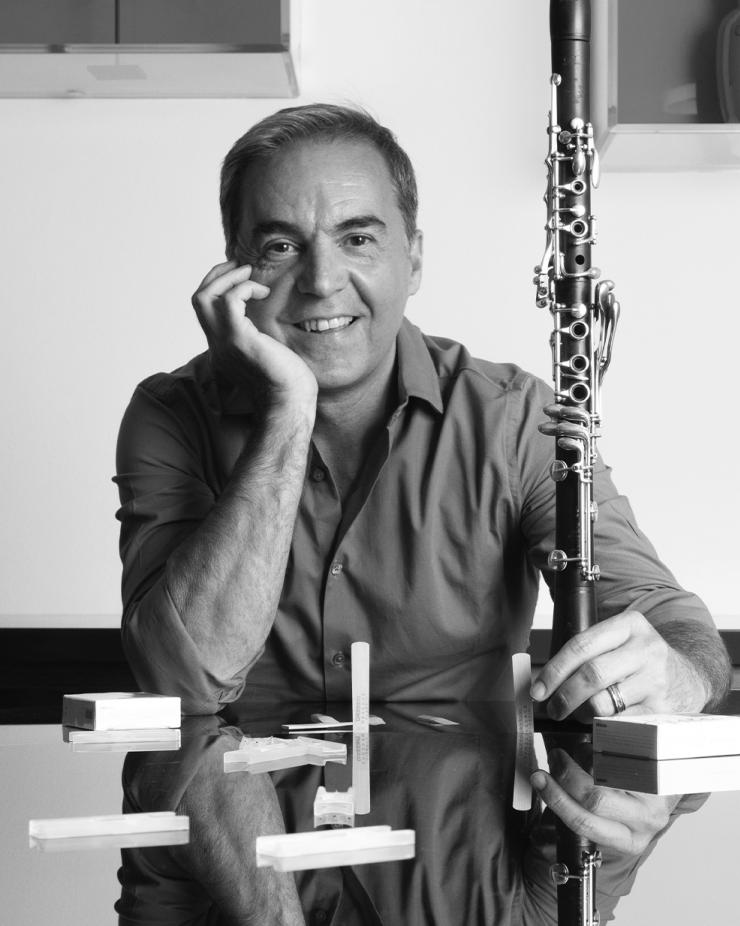